“The story was always there and it wouldn’t go away. My memory was never silent.”

FIRST THEY KILLED MY FATHER
Loung Ung was five years old when the Khmer Rouge army stormed into her city in April 1975, forcing her family to flee their home. For the next four years, the family hid their identities dispersed in order to survive. Without the protection of her family, Loung was trained as a child soldier in a work camp for orphans, her siblings were sent to labor camps, and those who survived the horrors would not be reunited until the Khmer Rouge was destroyed. Published in 2000, First They Killed My Father: A Daughter of Cambodia Remembers was selected by the Asian/Pacific American Librarians’ Association for “Excellence in Adult Non-fiction Literature.”  Click Here to read FTKMF teaching guide Email for Netflix FTKMF Discussion Guide.

“I encourage everyone to read this deeply moving and very important book. Equal to the strength of the book, is the woman who wrote it. She is a voice for her people and they are lucky to have her.” – Angelina Jolie, UNHCR Goodwill Ambassador.

“This is a strong story, simply told. Ung helps us understand what happens when a family is torn apart by politics, adversity, and war.  Change the names of the characters, give them another country of origin, and this story of dislocation becomes a tragedy millions of immigrants have lived through but seldom talk about…. Ung’s story is a compelling and inspirational one that touches universal chords. Americans would do well to read it, no matter where they were born.”
~ Washington Post Book World 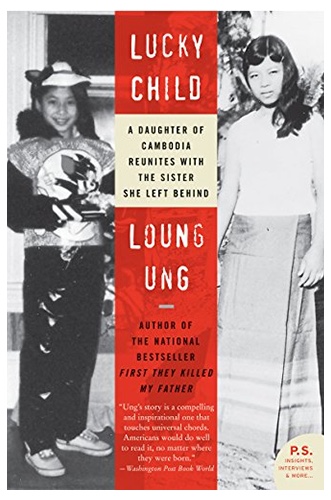 LUCKY CHILD
In this lyrical sequel to her bestselling, critically acclaimed memoir First They Killed My Father, Loung Ung describes her school years in Vermont as a Cambodian refugee and, in alternating chapters, gives voice to her sister’s experience as a genocide survivor left behind in rural Cambodia.

Lucky Child chronicles Loung’s struggles to uphold her family’s honor though she was forced to leave them in order to survive. As much Loung’s personal story as that of a war-torn family and nation, Lucky Child is a meditation on what might have been. This striking parallel of Loung’s life in America with her sister Chou’s life in postwar Cambodia highlights the harsh realities of chance and circumstances, both on a personal level for the Ung family and on a national level for all Cambodians. READING GUIDE FOR LUCKY CHILD

“Lucky Child is a tender, searing journey of two sisters, two worlds, two destinies.  It is about the long-term consequences of war—how it changes everything, annihilates, uproots, and separate families.  And it is about how human triumph—building live wherever they land and finding their way back to each other.” ~ EVE ENSLER, author of The Vagina Monologues

“This is a story of the triumph of a child’s indomitable spirit over the tyranny of the Khmer Rouge; over a culture where children are trained to become killing machines. Despite the heartache, I could not put the book down until I reached the end.” ~ QUEEN NOOR of Jordan, founder, Women and Development Project

LULU IN THE SKY
Lulu in the Sky, the last chapter in a life that began with her bestselling, critically acclaimed memoir First They Killed My Father, reveals Loung’s daily struggle to keep darkness and depression at bay while she attends college and falls in love with Mark, a Midwestern archetype of American optimism.  Lulu is a story of Loung’s tentative steps into love, activism, and marriage—a journey that takes her back to Cambodia to reconnect with her mother’s spirit and to a vocation that focuses on healing the landscape of her birth. READ REVIEWS & INSPIRATION FOR LULU IN THE SKY.

“Loung has written an eloquent and powerful narrative as a young witness to the Khmer Rouge atrocities. This is an important story that will have a dramatic impact on today’s readers and inform generations to come.” ~ DITH PRAN, whose wartime life was portrayed in the award-winning film The Killing Fields

“Ung brings third and first world disparities into discomforting focus and gracefully dramatizes the metaphorical joining together of her haunted past and her current identity as a privileged Cambodian American. When the narrative fuse at the sisters’ long-awaited reunion, their clasping of hands throws wide the floodgates of tamped-down memories – a cathartic release that readers will tearfully, gratefully share. ~ Booklist (starred review)

FIRST THEY KILLED MY FATHER IN TRANSLATION

FTKMF From Book to Film

FTKMF From Pages to Screen